It was a our anniversary week, my birthday and a Holy week when we went to the famed island of Camiguin. Despite the fact that tourists would flock the island due to the long vacation, we managed to get through buying tickets and waiting long lines to tick this island off our bucket list. 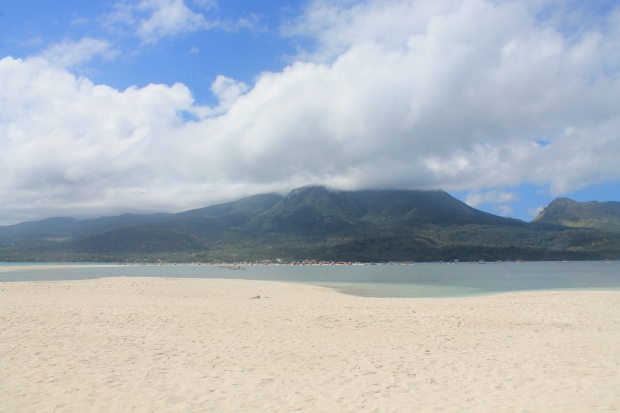 Our three- day adventure (which was extended to 4 days) started with our arrival in Cagayan de Oro. We boarded the Trans-Asia boat from Cebu City which departs at 8 pm from Monday to Sunday and arrives at CDO at around 7 am. Cokaliong shipping also caters trips from Cebu to Cagayan. Cebu Pacific has flights direct to Mambajao, Camiguin from Cebu City.

From the port of CDO, we have to take a multicab to reach the Agora Terminal. Fare is 7php/person. One has to go out of the port and cross the other street to see multicabs going to the terminal. There is nothing more sure than asking so it’s best if you ask the driver before you embark.

Entrance to the Agora Public Terminal

Since we will be arriving at the island 4-5 hours after, we decided to freshen up and eat breakfast at the Jollibee store inside the terminal.

We have to take the Butuan- bound bus from Cagayan since it makes a terminal stop in Balingoan. Fare is 160php/person for a Ceres aircon bus. Travel time is 2 hours. The bus ride was very refreshing since it was our first time to reach this part of the province. We were traversing on a coastline. 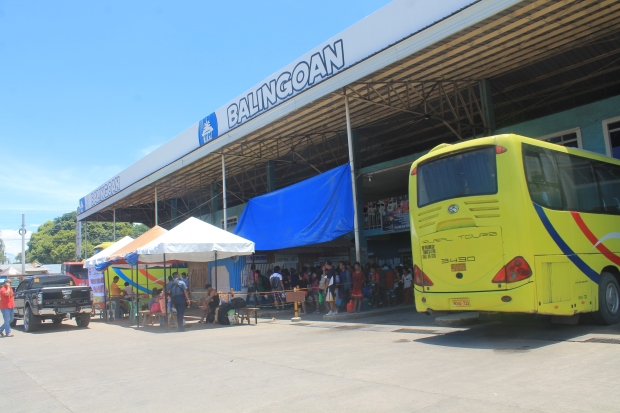 The town of Balingoan is considered as the gateway to Camiguin. At the terminal are ticket booths for Roro boats bound for Benoni in Camiguin. See the crowd on the picture? Those are people waiting in line for tickets.

There are three shipping lines catering the Balingoan- Benoni route almost every hour hence the long lines wouldn’t be a problem.

The port of Balingoan is just a short walking distance from the terminal.

After 1 hour, we arrived at the port of Benoni. I was amazed how the island, despite it’s fame remained simple and homey. Despite the flock of tourists, it still exudes that welcoming vibe of a province. 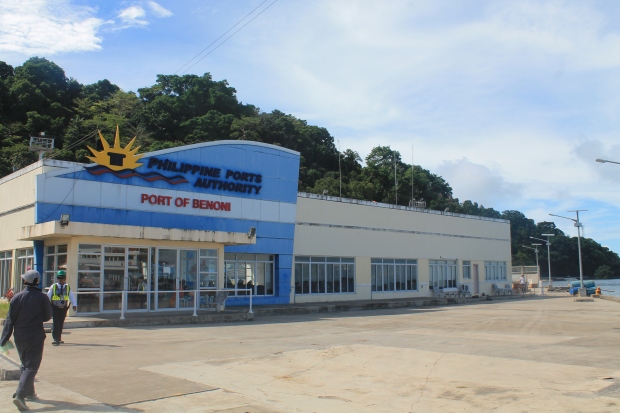 We just have to do this.haha

Later we found out that as part of the Holy Week, the island celebrates its Panaad Festival where participants and devotees walk around the island and complete the 15 Stations of the Cross placed on each part around the island. It was very overwhelming to see people doing this but a bit frustrating too since it would be hard for us to participate in such celebration due to time constraints and we still have a “little baggage” with us.hehe

From the port, we rode a vhire (30php/person) to Mambajao- the capital of the province. Its a mere 30 minute ride passing along the island’s rich coastline. We were booked for 2 days at the Mabini Lodge.We got a fair deal in Agoda.

This was our home for 2 days and I’d stay we made the right decision. We booked the hotel room for 1199/ night but got a very good deal in Agoda for only 600/night. It is newly built and located on a residential area in Mambajao. A short walking distance to the town center.

Our room is clean and well maintained and I would definitely recommend this to anyone who wants to visit the island. 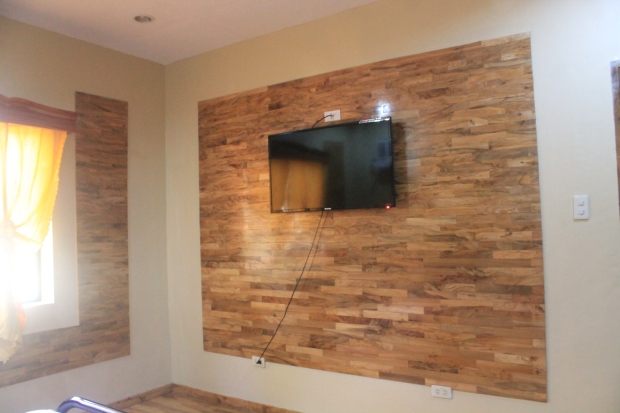 The long trip made us hungry that we decided to grab a very late lunch/early dinner. After freshening up, we went to check out La Dolce Vita which is just a short motorella ride from the hotel. Motorellas are the local’s mode of public transport around the town. It resembles a tricycle but it can carry up to 10 passengers. Fare is 10php

La Dolce Vita is an Italian resto located across the Mambajao airport. 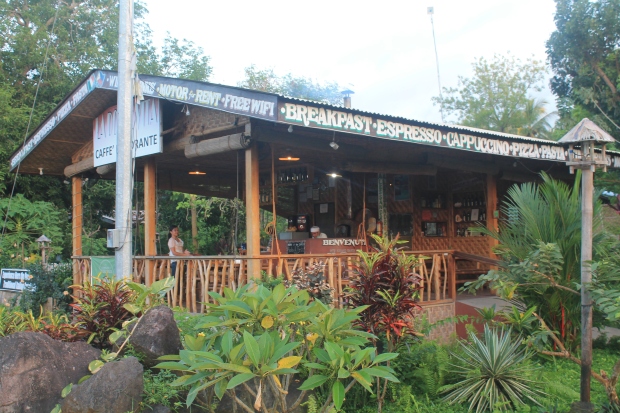 The place is simple yet cozy and the fact that while dining, you can see people walking gives it a relaxing feel. They offer specialty brick oven pizzas and pasta.

We had a hard time convincing our little one to eat since she knows only rice, fish and chicken.haha

The day before, we were able to find a multicab that would tour us around the island for 1,700 (8 hours). One has the option to rent a motorcycle for 500- 700 php depending on whether you want someone to drive for you or not.

What can I say? This is the main reason why tourists visit the island. The 1.4 km white sandbar off the coast of Mambajao is something worth every traveler’s dream to visit.

The jump off point is Brgy. Yumbing where you will be asked to register. The local government has done quiet a good job in assigning boats to tourists. Its more organized and efficient.

It is best if you bring something to eat and drink since swimming can be energy- draining.

You will be be asked to wait for your designated boat which will take you to and from the island.

The island was flocked with tourists.

Tents (100php) and beach mats (50php) are available for rent in the island.

The sand is powdery white. And the water is very enticing. We planned to stay just for an hour in the island yet we ended up taking half the day marveling it. 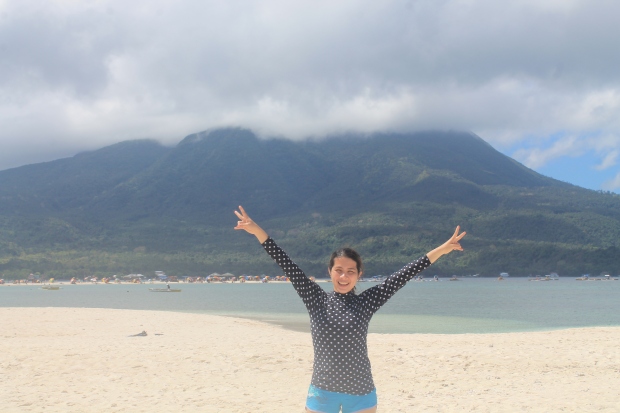 The island’s famous backdrop is Mt. Hibok- Hibok which is an active volcano.

Later we found out that the day prior to our visit, they had to pull out the tourists in the island due to Abu Sayaff scare in Bohol which is just adjacent to the island.

Walkway to the Old Volcano

Before we reached the walkway to the old volcano, our driver stopped and let us take pictures in this area. 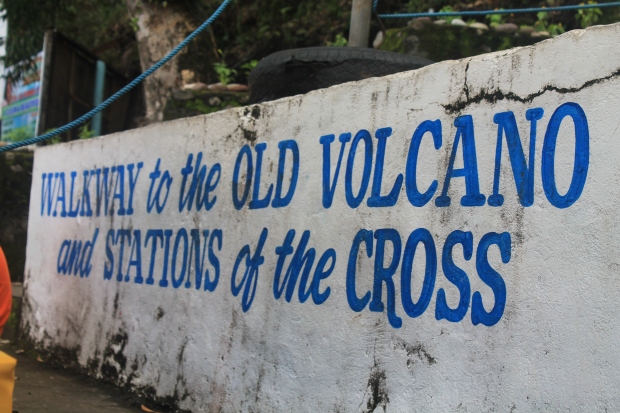 The Old Volcano is one of Camiguin’s seven volcanoes. Entrance to the walkway is 5php. Here, one has to walk an 8 kilometer uphill in order to reach the volcano’s peak. Beside each walkway are dioramas of the 15 Stations of the Cross.

The walk up was manageable. We thought it to be very steep but our 2 year old enjoyed walking up.

A diorama of the First Station of the Cross.

Since we were pressed for time, we decided not to pursue the peak and climb down instead.

We checked out the souvenir shops across the road. 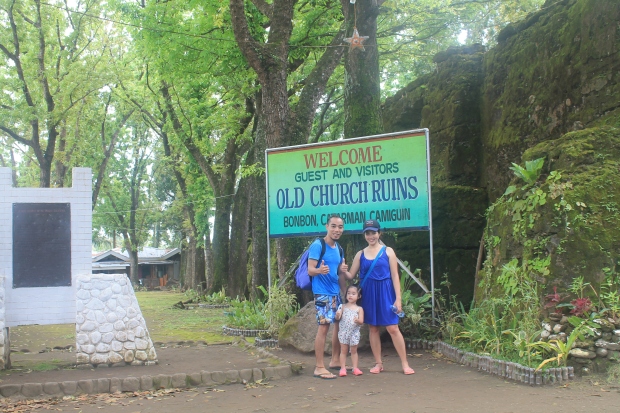 The church of Bonbon suffered a similar fate to that of Cagsawa in Albay. It was destroyed by a strong volcanic eruption of Mt. Vulcan during the 16th century.What’s left are ruins of what was once a church.

The area was full of trees and perfect for picnics.

We skipped swimming here since the falls was already full. Entrance fee is 30php.

There are three reasons why I wanted to visit Camiguin. First is the White Island and this is second on my list. I have always been intrigued by the idea of a sunken cemetery. Imagine riding a boat above an underwater cemetery? Creepy..haha

It sunk due to Mt. Vulcan’s violent eruption in the 16th century. They share the same fate as the Old Church Ruins.

One can just take a picture from afar but we decided to rent a boat for 100php to take us to the Large Cross. It was creepy and exciting knowing that the cemetery that sunk 4 centuries ago is right below us.

It was my first time to try out a hot spring hence I was a bit giddy as I set my foot on the waters of Ardent Hot Spring. But to my dismay, the water was not hot at all. What could have happened? I heard one saying “Hala dili na lgi init” (It’s not hot anymore). We just skipped swimming here and bothered not to ask why. 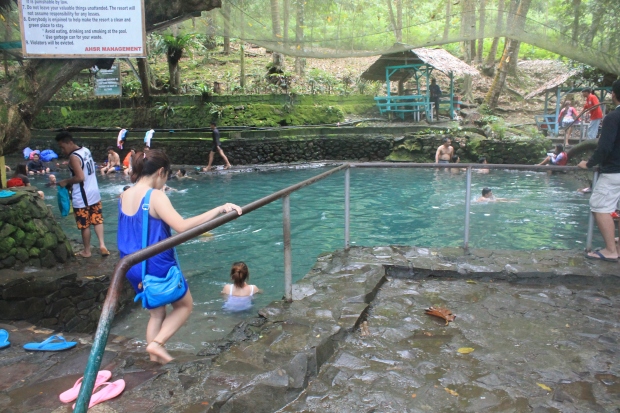 It was time for us to head back to reality. But first we have to visit my third reason for coming here. That is Camiguin’s mouthwatering Vjandep pastel.

Before heading to the airport, we went to the original Vjandep bakeshop to buy pasalubong.

It was overwhelming to see how this simple bakeshop makes mouthwatering pastel.

Later we found out that our trip (Cebu Pacific) was cancelled due to bad weather and they gave us the option to fly the day after next or choose a different route. We opted for the latter and found ourselves going back to Cagayan de Oro and retracing our way back home.

3 thoughts on “Camiguin: That Small but Fiery Island”